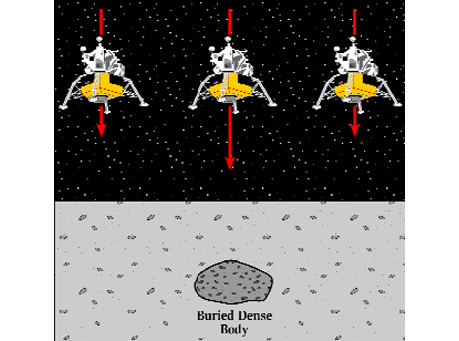 Gravity Survey is a Geohysical Technique which is based on mapping the localised variations in the Gravitational Field of Earth caused by sub-surface materials. The anomalies mapped by Gravity Survey are caused by the density contrast in the subsurface material. This very nature of this technique allow a wide range of applications of this method in Archeology, Oil & Gas, Mineral Exploration, Mining and Engineering Surveys.

In Gravity Survey two components of gravity forces (one due to earth and another due to lateral density change) are measured at the Earth's surface. Using the precise measurement of gravity and adjustment of corrections for larger component of gravitational force due to the whole Earth, a gravity or microgravity survey can detect the natural and or man-made cavities / voids, bedrock undulations, and other geological structures like faults / folds etc.

The interpretation of a gravity survey has its own limitation and is based on the assumptions of homogeneity. External information for the purpose of calibration of results of Gravity Survey in the form of drill hole date or measured density of the buried objects is required for precise and accurate interpretation as smaller masses at shallow depth can produce the same gravitational anomaly at surface as a large mass at deeper depth.

Gravity Survey is passive in nature and uses compact and portable instruments and hence is most suited for a populated area.