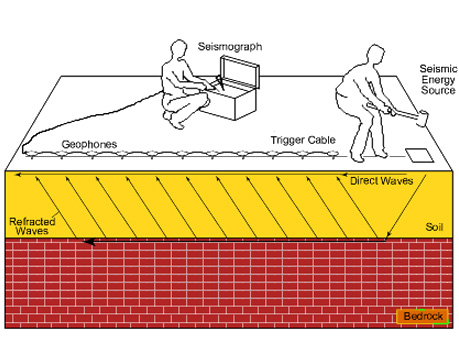 In Seismic surveys acoustic waves are generated in the ground using a seismic source, travel time of the reflected/refracted energy waves traveling through the earth to return to the surface is measured and seismic velocities of the sub-surface material is determined by analyzing the data.

By analyzing and interpreting this data, it is possible to gain some understanding of characteristics of subsurface layers such as depth, thickness, and attitude, which is related to seismic velocities of sub-surface material.

In seismic surveys, geophones are set out along a straight line and connected to the recording unit called seismograph. A seismic source, usually a weight drop or an explosive charge, generates an energy pulse. The time at which reflected or refracted signals are detected at each geophone is recorded on the seismograph. The time and distance data are then analyzed to determine the seismic velocities, which are finally interpreted for sub-surface material characterization.

ORIZON having extensive experience, state-of-the-art equipment, interpretation methods, and software is able to overcome the limitations of difficult site conditions and provide our clients with interpretations based on high quality data in extremely difficult conditions.