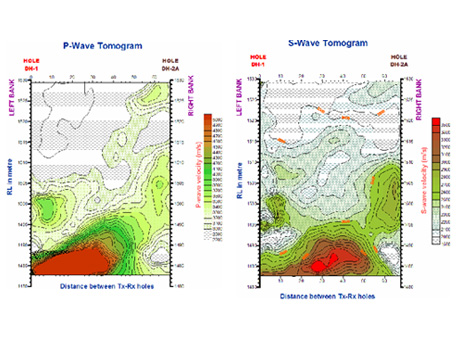 Seismic tomography is one of the latest high resolution geophysical cross-hole techniques for locating vertical subsurface anomalies between two or more drill holes using a pictorial display. Seismic tomography, as with medical tomography, allows us to image the interior of a given structure. Basic principle is similar to seismic refraction- Travel times of the seismic waves traveling through the medium are measured and seismic velocities are determined at different points along the depth of the borehole. Using these seismic velocities a two dimensional image or section through a three dimensional body showing variation in seismic velocities called Tomograms are generated. Seismic velocity of subsurface layers thus determined is subsequently interpreted for assessing the geotechnical properties and homogeneity of subsurface material.

How Tomograms are generated:

Seismic tomography can be employed in situations where problems are suspected, or sections suspected of containing concealed problems. In addition, the method can be used to verify the integrity and quality of the materials used during construction.