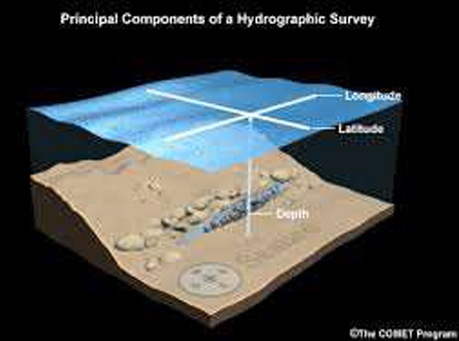 Hydrographic Survey is a survey of a body of water to determine several classes of data pertaining to it, such as depth, configuration, and nature of the bottom; direction and force of the currents; heights and times of tides; and location of fixed objects for navigation purposes. These data form the basis for a navigational chart. It strictly applies to survey of any navigable waters, including lakes and rivers, but it is most commonly applied to marine navigation.

Hydrographic Surveys deals with the measurement and description of the physical features & land areas of water bodies such as rivers, lakes, costal areas and sea.

One of the major applications of all hydrographic surveys is determining the water depth which is used for nautical charting, which requires precise location of least depths on dangers to navigation and depths significant to surface navigation.

The basic principle behind bathymetry is the use of acoustic waves (in the range 30 to 250kHz) to measure the water depth. A complete bathymetry system includes a vessel, an echo-sounder (analogue or digital) and a positioning system (DGPS or RTK). The depth information is geo-referenced in real time and recorded on a portable computer on-board the boat.

Single beam systems are simpler and are used for small, shallow water surveys with difficult access. Swath (or multi-beam) surveys are used for surveying large areas, such as ports, waterways, lakes and at sea. Swath systems are capable of attaining 100% coverage of the bottom, over a width of 5-10 times water depth, and hence are very efficient once operating.

One of the major concern of most of the surveys is mapping the nature of the sea / river / lake floor material (i.e. sand, mud, rock) due to its implications for anchoring, dredging, structure construction, pipeline and cable routing and fisheries habitat. Hydrographic Surveys like Sub-Bottom Profiling & Side Scan sonar are capable of mapping the sub-bottom material of water bodies. Company is exclusively associated with leaders in the field of Sub-Bottom Profiling (SBP) & Side Scan Sonar (SSS) Surveys.